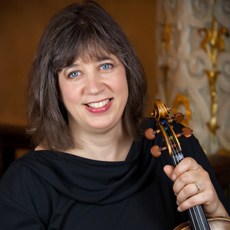 Violinist Alison Peters Fujito, originally from Glencoe, Ill., is proud to be a product of music in the public schools. She credits her high school orchestra director, Stanley Ackerman, with her love of violin and classical music. She began violin lessons in elementary school at her mother's suggestion, but thoroughly disliked practicing — until she played in string quartets and the four orchestras of New Trier East High School, directed by Ackerman.
She attended University of Cincinnati's College-Conservatory of Music as recipient of the Dorothy Richard Starling Fellowship, studying with Dorothy DeLay and Kurt Sassmanshaus and graduating summa cum laude. She received her Master of Music degree from The Julliard School, where she studied with DeLay and Hyo Kang. Other teachers included Wolfgang Schneiderhan, Jaquces Israelievitch, Blair Milton, Shmuel Ashkenasi, Linda Cerone and David Taylor.

After graduating from Julliard, Fujito was hired by Gerard Schwarz for the first violin section of the Seattle Symphony, and in 1987, she was appointed to the first violin section of the Pittsburgh Symphony Orchestra by Lorin Maazel.
Fujito has appeared as soloist with several orchestras, including the Pittsburgh Symphony on several occasions. She was a founding member of Roy Sonne's Ionian Chamber Players, has performed in several summer music festivals and, with some of her Pittsburgh Symphony colleagues, delights in performing string quartets at local schools.

Fujito is an advocate of the Suzuki method of teaching violin to all ages and is registered with the Suzuki Association of the Americas, having completed teacher training for books 1-4 with notable instructors such as Michele George and Ed Kreitman. She is a firm believer in the importance of instrumental music instruction in the public schools and has spoken at many school board meetings. She was formerly an adjunct violin instructor at Duquesne University, and currently enjoys providing assistance to the many fine public school string instructors in the Pittsburgh area.
​
Fujito is married to Dr. Don Fujito, chemistry professor at LaRoche College. They are the proud and sleepless parents of three children, as well as three cats and a Border Collie/Newfoundland mix who likes to sleep on the feet of violin students.