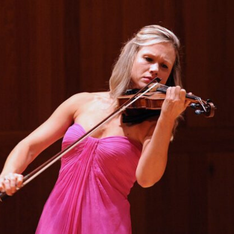 Brittany MacWilliams, violin and viola, has an active career both as performer and educator. She made her professional violin debut at age ten with the Louisville Orchestra and went on to win numerous competitions including the Music Teachers National Association competition. Since then, Ms. MacWilliams has performed extensively as soloist and concertmaster in such diverse locales as Istanbul, Beijing, Salzburg, Munich, Lisbon, and New York. She has had solo engagements with such orchestras as the Cincinnati Symphony Orchestra, Louisville Orchestra, Munich Hochshule Orchestra, Kentucky Symphony, and Aspen Chamber Symphony. Ms. MacWilliams can be heard as soloist on two critically acclaimed compact discs of Giornovichi Violin Concerti for the Arte Nova Classics/BMG label.

As a frequent recitalist and avid chamber musician, Ms. MacWilliams performs in duos, piano trios, and string quartets throughout the United States. She is a founding member of the Baur Quartet and the Xavier Trio and has recorded four compact discs for the Vital Sounds label, including the Ten Celebrated String Quartets of W.A. Mozart. She can also be heard on “Passion from the Romantic Era,” a CD featuring Brahms’ Violin Sonata in D minor. She was chosen as resident artist for the Next Generation Music Festival where she toured and performed with the Baur Quartet and pianist Awadagin Pratt.

Ms. MacWilliams is currently a member of the violin and viola faculty at the University of Louisville School of Music. She is also the director of the UofL String Academy, a program for talented and dedicated pre-college students, and founder and director of the Oldham County Chamber Ensemble, where she conducts the Chamber Orchestra and teaches chamber music. She taught at the University of Cincinnati College-Conservatory of Music as a member of the violin faculty from 2001-2012. She was also a member of the violin faculty at Xavier University, where she taught violin, viola, and chamber music for six years. She was the director and a member of the violin faculty of the Starling Preparatory String Project at the University of Cincinnati for twelve years. During the summers, Ms. MacWilliams has served on the faculties of the Aspen Music Festival and the Great Wall International Music Academy in Beijing, and she currently teaches at the Sewanee Summer Music Festival.
​
Ms. MacWilliams was the first winner of the prestigious Dorothy Richard Starling Teaching Fellowship in 2001, and over the years her students have won national competitions, performed with major orchestras, and received music scholarships to many top universities and conservatories. Ms. MacWilliams received her B.M. and M.M. degrees from the University of Cincinnati College-Conservatory of Music as a student of Kurt Sassmannshaus and Dorothy DeLay.