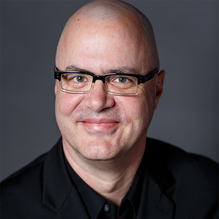 Lance LaDuke is internationally known as an educator, writer, speaker and performer (euphonium, trombone, singer and enthusiastic ukulele-ist). Lance is the Assistant Teaching Professor in Euphonium and Music Entrepreneurship at Carnegie Mellon University. His additional duties at CMU include serving as the Freshman Advisor, Coordinator of Special and Creative Projects, director of the Tartan Tuba Band and co-director of the Exploded Ensemble, an experimental electro-acoustic ensemble. Lance is a former member of international touring quintet Boston Brass, the United States Air Force Band in Washington DC and the River City Brass Band, the only full time professional brass band in the country.

Lance has performed with some of the finest ensembles in the country, including the Philadelphia Orchestra, the Brass Band of Battle Creek and the Pittsburgh Symphony. He has taught and/or given masterclasses at some of the world’s finest universities and conservatories, including Juilliard, the Royal Academy of Music in London, the Hong Kong Academy for Performing Arts and the Tatui Conservatory in Brazil. He has appeared on over thirty recordings, has produced ten others and has toured extensively throughout North America, South America, Europe and Asia, performing in over 25 countries and all 50 states. His performances have been seen and heard on countless television and radio programs and Lance has appeared onstage with such legendary artists as Henry Mancini, Doc Severinsen, Morton Gould, Morgan Freeman, and Frederick Fennell.

A graduate of Michigan State University, Lance received a bachelor’s degree in Music Education, with a cognate in English. After graduate study at the University of Akron (euphonium performance) and George Mason University (instrumental conducting), Lance joined the United States Air Force Band in Washington D.C. While there, he performed for two presidents, countless dignitaries and heads of state and in hundreds of protocol functions, ceremonies, and public relations tours. He maintained a Top Secret security clearance, played for well over a million people from the White House to Red Square, and can be seen (with a magnifying glass) in the movie A Clear and Present Danger.

Lance has written for countless organizations, including sketches for radio, stage and themed attractions. He was a member of several improv comedy troupes, co-wrote and produced (with Deanna Swoboda) Band Blast Off, a band recruiting DVD and is co-director of the Savvy Arts Venture Challenge. He works with VH1 Save the Music, has performed at TEDxCMU and has a song headed to the moon as part of a Space X project. He is the host of the Modern Musicking Podcast and co-host (with Andrew Hitz) of the Brass Junkies Podcast. His comedy songs, including a touching elegy to a dead goldfish and a song about getting underwear for Christmas, are available for viewing on his website.
​
Most recently, he has launched a speaking career and regularly shares his ideas on practice, leadership, self-development, motivation, entrepreneurship, and innovation.