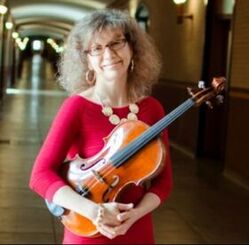 Olga Taimanov began her musical studies on viola as a native of Saint Petersburg, Russia, where she attended the Special Music School for Gifted Children. She has a Master of Music degree from the Saint Petersburg State Conservatory and an Artist Diploma from Duquesne University in Pittsburgh, Pennsylvania.

Before moving to the United States in 2000, Ms. Taimanov held numerous orchestra positions in Russia and Israel. She was Principal Violist of the Saint Petersburg Chamber Orchestra “Mozarteum and toured extensively with them, as well as Principal Viola of the State Symphony Orchestra “Klassica.” She was also Associate Principal Viola of the Israel Kibbutz Chamber Orchestra and performed with the St. Petersburg Philharmonic Orchestra and the Israel Philharmonic Orchestra under world famed conductors, Zubin Mehta, Kurt Masur, Yuri Temirkanov, Lorin Maazel, and Mariss Jansons, and many others.

Ms. Taimanov has extensive chamber music experience and has performed at international chamber music festivals, including “Abu-Gosh” in Israel, “Villa Music” in Germany, “The White Nights” in Russia, and “Goetehanum” in Switzerland. While in Russia, her string quartet “String Quartet Klassica,” toured extensively for two years throughout Europe, including Germany, Switzerland, and Finland. After coming to the US, Ms. Taimanov was recognized for her chamber music and her piano trio won the Pittsburgh Concert Society Competition in 2001. In 2002 she was nominated for the National All-American Scholar Collegiate Award.

Currently Ms. Taimanov devotes the majority of her time teaching violin and viola students and maintains a large studio in Pittsburgh. She is a faculty member of the Carnegie Mellon University, Preparatory School, the position she has held since 2005, faculty member at Johnstonbaugh's Music Center as well as faculty member at "InterHarmony" International Music Festival (Germany/Italy).