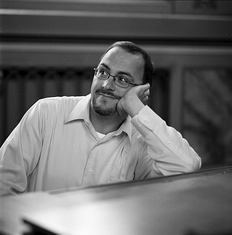 Internationally acclaimed Pianist, composer,writer, historian, and arranger Tom Roberts is one of the leading exponents of early jazz piano.

He has lived and performed for extensive periods in both New Orleans as well as New York in Harlem.

He has performed through out the world playing Harlem stride piano

Tom has  arranged and performed the music for Martin Scorsese’s film The Aviator, the NPR show Riverwalk Jazz,  Wynton Marsalis, and Jazz in July with Dick Hyman at Manhattan’s 92nd St

He has contributed articles for magazines such as Piano Today

He is the creator of The Hot Club of Pittsburgh a group where people gather in public spaces to listen to 78 rpm shellac records and hear music that they would normally never experience
​
He frequently appears as a guest host on Ryhthm Sweet and Hot on 90.5 WESA